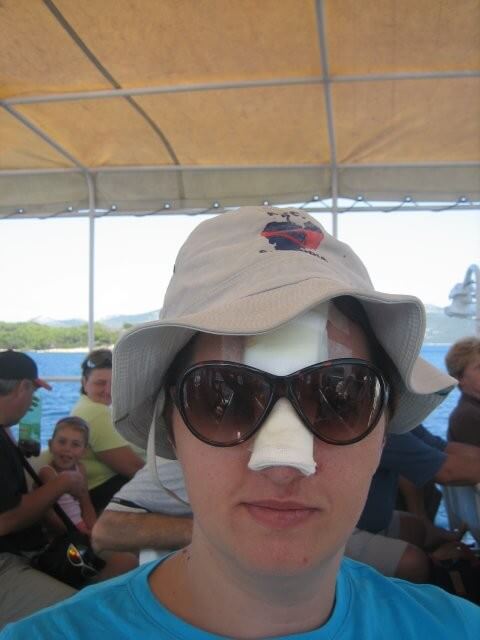 After a Nose Job, How Soon Can I Return to Work?

Many people who get rhinoplasty surgery often have other cosmetic surgery operations done at the same time. Rhinoplasty on its own is not a particularly complicated surgery procedure. The doctor makes an incision into the patient’s nose. Doctors may add or remove cartilage to make the shape of the nose aesthetically appealing. A patient who undergoes this surgery often waits a few days before returning to work, but most patients are able to return to work the following day. In some cases it can require an overnight stay in the hospital. All doctors give different advice after surgery, so be sure to make plans before your surgical procedure if you think you’ll need a few days off.

Doctors typically put a splint and bandages on the patient’s nose. These can usually be removed within a week’s time. The areas around the nose may appear swollen. The area around the incision is usually sensitive and bruises easily. It is very important to avoid any strenuous activity after any surgical procedure. This can raise blood pressure and cause hemorrhaging. Many patients want to remove the bandage and splint early to see the how the surgery turned out. This is a bad idea because the splint is holding the cartilage in place. Removing the bandages early also increases the risk of infection around the incision. The fastest way to speed up the healing process after surgery is to maintain a healthy lifestyle. Patients should drink plenty of water, eat balanced meals and get sufficient rest.

There is usually very little pain after a rhinoplasty procedure, but many patients take aspirin to numb the affected area. Protecting the nose after surgery is also important. Avoid bumping or hitting your nose. Even a minor tap can cause the splint to break or become dislodged. It’s also important to avoid sniffing or blowing one’s nose for a week following this procedure. Those with stuffy noses can use saline nasal sprays to clear the nasal passages.

The amount of time it takes to return to work after a Rhinoplasty Boca Raton surgery depends largely on the kind of work that is performed. Those who work in service related industries should be able to return to work the following day. Many patients prefer to wait until the bandages can be removed. Employees who do manual labor should wait at least a week before returning to their jobs.